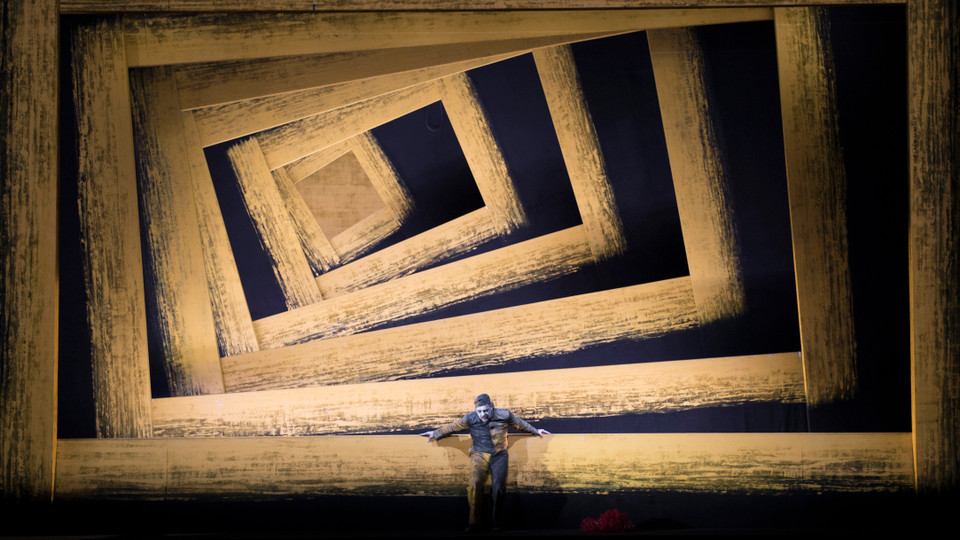 The dramatic fragment of the unfinished play by the German playwright Georg Buchner, which Alban Berg based his opera on, is a dispassionate example of social injustice and human suffering. At the same time, it is a grotesque, gaining strength in exaggerations. Director Andreas Homoki refuses any realism: his radical creation is inspired by the puppet theatre. The production won the 2017 International Classical Music Award.

Soldier Wozzeck shaves the Captain, he demands to do it more slowly, and then lectures the soldier, reproaching him in immoral behavior: Wozzeck has an illegitimate child.

Wozzeck replies that virtue is a luxury not available to the poor. Wozzeck and his friend Andrés are cutting firewood in a field. Wozzeck is frightened by hallucinations, he hears noise, and the setting sun seems to him like a fire in which the earth burns. Suddenly everything calms down.

Marie, the mother of Wozzeck's child, and her neighbor Margret watch a military band pass down the street. Marie admires the handsome tambour-major, Margret makes fun of her. Left alone, Marie sings a lullaby to her little son. Wozzeck appears. He talks about his visions, they seem to him bad omens. Marie tries to calm him down, but he runs out of the barracks without even looking at his son. Marie is in tears, she also runs out of the room, leaving the baby behind.

Wozzeck comes to the doctor, who pays him to participate in pseudo-scientific experiments. The doctor is looking forward to becoming famous for his research. He prescribes Wozzeck a diet. Wozzeck is again haunted by visions, which the doctor believes to be confirmation of his theories.

Tambour-major lavishes compliments on Marie at the door of her house. At first, she resists his advances, but then gives in.

Marie admires the earrings given to her by the tambour-major. When Wozzeck arrives, she tries to hide them and then says she found them on the street. Wozzeck suspects something is wrong. He gives her the money he has earned and leaves. Marie is overcome with remorse.

Wozzeck attacks Marie with his suspicions and forces her to confess to treason. He is ready to hit her, but Marie coldly replies, "Better a knife in the body than someone's hand on me."

The captain and the doctor meet on the street and talk about sickness and death. Wozzeck passes by, they hint that Marie is unfaithful to him. Wozzeck asks not to mock the only thing that is dear to him in the world, and then runs away.

Two drunken apprentices entertain people in a pub. Wozzeck enters and sees Marie dancing with the tambour-major. A dummy approaches Wozzeck and says that he smells blood. Wozzeck imagines that the dancers in the beer hall are covered in blood.

Iin the evening Wozzeck wakes up with nightmare memories of what he saw in the beer hall. The drunken tambour-major enters, boasting of his victory. The men fight and Wozzeck loses.

Marie is alone with the child. She reads the Bible, first about the forgiven adulteress, then about Mary Magdalene, and prays to God for mercy.

Marie and Wozzeck are strolling near the pond. Marie wants to get back to the city as soon as possible, but Wozzeck forces her to sit next to him. He kisses her and makes jokes about her fidelity. When Mari tries to escape, he draws a knife and kills her.

Wozzeck drinks in a tavern, shouting incoherent words, and dances with Margret. Margret notices blood on his hands, he can't explain where it came from, and runs out.

At the pond Wozzeck looks for his knife and throws it into the water. Suddenly it seems to him that the moon is ready to reveal his crime to everyone. He goes further and further into the water to wash off the blood and re-stash the knife in a safer place. The doctor and the captain hear him drowning while walking near the pond.

Neighborhood children play in the street and tell Marie's son that his mother has died. He does not understand their words and continues to play, singing a song.